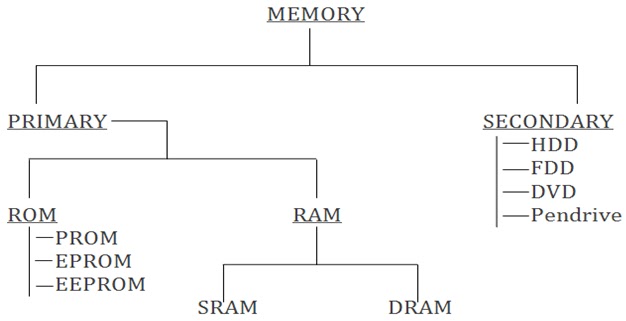 Static random-access memory (SRAM or static RAM) is a type of semiconductor memory that uses bistable latching circuitry in which the circuit is stable in either state. It can be flipped from one state to the other by an external trigger pulse. This circuit is also known as a flip flop. It can be used to store one bit of information.
The term static differentiates it from dynamic RAM (DRAM) which must be periodically refreshed. SRAM exhibits data remanence, but it is still volatile in the conventional sense that data is eventually lost when the memory is not powered. SRAM retains its contents as long as the power is connected and is easy to interface to but uses six transistors per bit which make it less dense than Dynamic Ram which uses only 1 transistor.

Dynamic random-access memory (DRAM) is a type of random-access memory that stores each bit of data in a separate capacitor within an integrated circuit. The capacitor can be either charged or discharged; these two states are taken to represent the two values of a bit, conventionally called 0 and 1. Since even "nonconducting" transistors always leak a small amount, the capacitors will slowly discharge, and the information eventually fades unless the capacitor charge is refreshed periodically. Because of this refresh requirement, it is a dynamic memory as opposed to SRAM and other static memory.

SRAM retains its contents as long as the power is connected and is easy to interface to but uses six transistors per bit. Dynamic RAM is more complicated to interface to and control and needs regular refresh cycles to prevent its contents being lost. However, DRAM uses only one transistor and a capacitor per bit, allowing it to reach much higher densities and, with more bits on a memory chip, be much cheaper per bit. SRAM is not worthwhile for desktop system memory, where DRAM dominates, but is used for their cache memories. SRAM is commonplace in small embedded systems, which might only need tens of kilobytes or less. Forthcoming volatile memory technologies that hope to replace or compete with SRAM and DRAM include Z-RAM, TTRAM, A-RAM and ETA RAM.

Pronounced prom, an acronym for programmable read-only memory. A PROM is a memory chip on which data can be written only once. Once a program has been written onto a PROM, it remains there forever. Unlike RAM, PROMs retain their contents when the computer is turned off. The difference between a PROM and a ROM (read-only memory) is that a PROM is manufactured as blank memory, whereas a ROM is programmed during the manufacturing process. To write data onto a PROM chip, you need a special device called a PROM programmer or PROM burner. The process of programming a PROM is sometimes called burning the PROM. An EPROM (erasable programmable read-only memory) is a special type of PROM that can be erased by exposing it to ultraviolet light. Once it is erased, it can be reprogrammed. An EEPROM is similar to a PROM, but requires only electricity to be erased.

Pronounced e-prom, EPROM is a special type of memory that retains its contents until it is exposed to ultraviolet light. The ultraviolet light clears its contents, making it possible to reprogram the memory. To write to and erase an EPROM, you need a special device called a PROM programmer or PROM burner. An EPROM differs from a PROM in that a PROM can be written to only once and cannot be erased. EPROMs are used widely in personal computers because they enable the manufacturer to change the contents of the PROM before the computer is actually shipped. This means that bugs can be removed and new versions installed shortly before delivery. A note on EPROM technology: The bits of an EPROM are programmed by injecting electrons with an elevated voltage into the floating gate of a field-effect transistor where a 0 bit is desired. The electrons trapped there cause that transistor to conduct, reading as 0. To erase the EPROM, the trapped electrons are given enough energy to escape the floating gate by bombarding the chip with ultraviolet radiation through the quartz window. To prevent slow erasure over a period of years from sunlight and fluorescent lights, this quartz window is covered with an opaque label in normal use.

Acronym for electrically erasable programmable read-only memory. Pronounced double-e-prom or e-e-prom, an EEPROM is a special type of PROM that can be erased by exposing it to an electrical charge. Like other types of PROM, EEPROM retains its contents even when the power is turned off. Also like other types of ROM, EEPROM is not as fast as RAM. EEPROM is similar to flash memory (sometimes called flash EEPROM). The principal difference is that EEPROM requires data to be written or erased one byte at a time whereas flash memory allows data to be written or erased in blocks. This makes flash memory faster.

Short for Ferroelectric Random Access Memory, a type of non-volatile memory developed by Ramtron International Corporation. FRAM combines the access speed of DRAM and SRAM with the non-volatility of ROM. Because of its high speed, it is replacing EEPROM in many devices. The term FRAM itself is a trademark of Ramtron.

A type of non-volatile memory composed of a thin layer of material that can be easily magnetized in only one direction. When a magnetic field is applied to circular area of this substance that is not magnetized in the same direction, the area is reduced to a smaller circle, or bubble. It was once widely believed that bubble memory would become one of the leading memory technologies, but these promises have not been fulfilled. Other non-volatile memory types, such as EEPROM, are both faster and less expensive than bubble memory.

A special type of EEPROM Introduced by Toshiba in 1984, flash memory was developed from EEPROM (electrically erasable programmable read-only memory). There are two main types of flash memory, which are named after the NAND and NOR logic gates. The internal characteristics of the individual flash memory cells exhibit characteristics similar to those of the corresponding gates. It can be erased and reprogrammed in blocks instead of one byte at a time. Many modern PCs have their BIOS stored on a flash memory chip so that it can easily be updated if necessary. Such a BIOS is sometimes called a flash BIOS. Flash memory is also popular in modems because it enables the modem manufacturer to support new protocols as they become standardized.

An arithmetic overflow is a condition that occurs in computers, especially in the area ofcomputer programming, when a calculation or operation yields a result that is too large for the storage system or register to handle. Overflow can also refer to the amount by with the given result exceeds the memory designated for storage.

In computer science, a memory leak occurs when a computer program incorrectly manages memory allocations in such a way that memory which is no longer needed is not released. In object-oriented programming, a memory leak may happen when an object is stored in memory but cannot be accessed by the running code. A memory leak has symptoms similar to a number of other problems (see below) and generally can only be diagnosed by a programmer with access to the program.

In computing, a segmentation fault (often shortened to segfault) or access violation is a fault raised by hardware with memory protection when application tries to access memory addresses which it doesn't have the right to access, thus protecting the integrity of other processes in the systems and the system as a whole.

In computer security and programming, a buffer overflow, or buffer overrun, is an anomaly where a program, while writing data to a buffer, overruns the buffer's boundary and overwrites adjacent memory. This is a special case of violation of memory safety.

This offers several advantages. Computer programmers no longer need to worry about where the memory is physically stored or whether the user's computer will have enough memory. It also allows multiple types of memory to be used. For example, some memory can be stored in physical RAM chips while other memory is stored on a hard drive. This drastically increases the amount of memory available to programs. The operating system will place actively used memory in physical RAM, which is much faster than hard disks. When the amount of RAM is not sufficient to run all the current programs, it can result in a situation where the computer spends more time moving memory from RAM to disk and back than it does accomplishing tasks; this is known as thrashing.

Protected memory is a system where each program is given an area of memory to use and is not permitted to go outside that range. Use of protected memory greatly enhances both the reliability and security of a computer system.

Without protected memory, it is possible that a bug in one program will alter the memory used by another program. This will cause that other program to run off of corrupted memory with unpredictable results. If the operating system's memory is corrupted, the entire computer system may crash and need to be rebooted. At times programs intentionally alter the memory used by other programs. This is done by viruses and malware to take over computers.

Protected memory assigns programs their own areas of memory. If the operating system detects that a program has tried to alter memory that does not belong to it, the program is terminated. This way, only the offending program crashes, and other programs are not affected by the error.

Protected memory systems almost always include virtual memory as well.
Posted by Moustafa MEAILY at 11:00 AM